NORDIC FRONTIER. Björn Borg wants tennis without borders, Sweden Democrats – the new Social Democrats and Pär Öberg joining us for a breakdown of the Almedalen event.

This week your dedicated Nazi podcast hosts discuss the domestic downfall of the Nordic Nation as per usual, but are joined in the second segment by Pär Öberg, press spokesman, leader of the parliamentary branch of the Movement and also a member of the Nordic Council. They engage in the ultimate breakdown of the events in Almedalen.

We present the results of the Nordic Challenge.

Our opening discussion regarding Björn Borg and his virtue signalling campaign.

Unemployment on the rise – saturation of Invaders might be the reason why.

SD biggest among the workers – Stefan Lövén doesn’t buy it.

Norway flushes 12 billion down the toilet.

40 shootings in Malmö in six months – the police claims to be on the right track.

5 out of 6 invader children are not children. 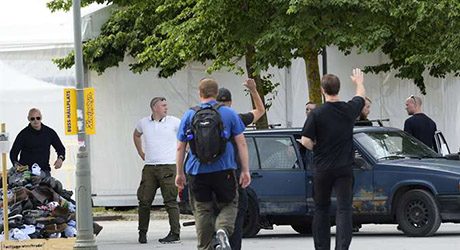 Emil Hagberg schooling the #Immigrant youth: "We prioritize our people's survival above figuring out where you'll have to go in the future." pic.twitter.com/2d2ujQNEcc

A nice rug was found.

And there was a nice rug on which our #NationalSocialist #FreedomFighters could wipe their boots. We make good use of garbage.#Almedalen pic.twitter.com/l3J0i6X7rk

History repeats itself. #PhiloSemites make piles of shoes, it's a sure sign of another #Shoah.#Almedalen#ochjagprotesterade pic.twitter.com/nWnit6qUa9

Arrested for ”rioting” (calling the Green’s spokesperson a traitor of the people).

Other Videos this week:

Action against Homo March in Nyköping.

Charlie and his orchestra – Submarines