NORDIC FRONTIER. This #NordicThursday we discuss what it takes to be an Activist in the Nordic Resistance Movement. We also discuss news and recent activities of the Movement. 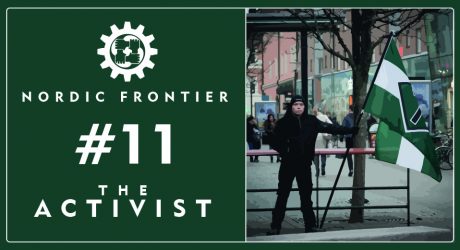 In the first segment we start off by discussing the phenomenon of child marriage in the North, followed by the treacherous outbreaks of our Democracy Minister Alice Bah Kuhnke, the Jewish owned Daily News’ attacks on Sweden’s alternative media and a recent video uploaded about Rinkeby. How it went from a Swedish suburb created in the purpose of staving of Swedish homelessness, to multicultural a hell hole.

We then move into the latest activities of the Movement, we discuss a scuffle that erupted between the political oppressors (Police) and the politically oppressed (The Resistance Movement). And we finish the first segment with another gut wrenching Black Pill.

In the second segment we dig into the Activist Handbook of the Nordic Resistance Movement. Starting with a reading of a paragraph dealing with the mentality of the activist, the Culture versus Anti-Culture which leads into a discussing. We also bring up many examples of things you should Goy-Cott. After that we run through the physical test of the Activist followed by the Rules of the Movement.

Listen to ”Nordic Frontier #11: The Activist” on Spreaker.